STRENGTHENING THE CONFLICT RESOLUTION AND PEACEBUILDING CAPACITIES OF THE NATIONAL CHAMBER OF KINGS AND TRADITIONAL CHIEFS IN COTE D’IVOIRE February 5 -7, 2020 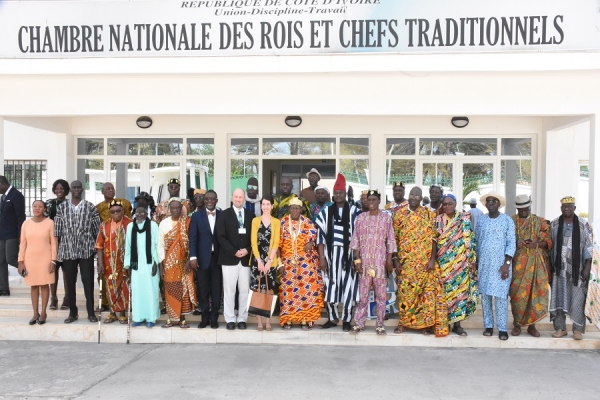 The N’Zarama Center for Peacebuilding (NCP), with financial support from the US Embassy’s Public Affairs section, is implementing a project entitled “Strengthening the Conflict Resolution and Peacebuilding Capacities of the Directorate of the National Chamber of Kings and Traditional Chiefs in Cote d’Ivoire”.

The project is comprised of a training workshop and capacity building sessions in conflict resolution for the members of the Directorate of the National Chamber of Kings and Traditional Chiefs of Cote d’Ivoire.  In addition, a seminar will be held focusing on the implementation of early warning systems and a training manual will be produced for the participants.

The Yamoussoukro Training Workshop was the first in a series of two workshops focused on strengthening the conflict resolution and peacebuilding capacities of the Directorate of the Chamber. The workshop also served as the official launching of the project. The members of the Directorate of the Chamber are mandated to serve as the custodians of culture and traditions of Cote d’Ivoire, preserve social cohesion, and resolve community- based conflicts.

The training workshop on Conflict Resolution and Peacebuilding was aimed at introducing practical contemporary conflict resolution techniques and peacebuilding strategies that members of the Directorate of the Chamber can effectively utilize alongside their traditional approaches when managing conflict in their communities. Thirty-five members of the Directorate of the Chamber participated in the training. The President of the Chamber, His Majesty Nanan Desiree Amon TANOE, was also in attendance. In all, 31 regions, two autonomous districts (Abidjan and Yamoussoukro) and two Kingdoms were represented.

Participating in the project launch and the opening ceremony and representing Ambassador Richard K. Bell, US Ambassador in Cote d’Ivoire, was the US Embassy Communications Officer Mrs. Marion Wholers. Also participating in the workshop were technical members of staff of the Chamber. S-CAR alumni Dr. Joshua N. Weiss and Dr. Tony Karbo jointly facilitated the training workshop.

A general theme was identified for each of the three days of the workshops, including Conflict Analysis; Conflict Resolution Frameworks and Processes; and Key Dynamics impacting Conflict. The participation and sharing of experiences among the trainees was crucial and consistent with NCP training methodology. Each participant was encouraged to take advantage of a wide range of experiences to enrich their knowledge of Conflict Resolution and Peacebuilding. To enhance structured interaction, several sessions of the program were organized for group discussions, using simulated conflict scenarios. Plenary sessions were set up for report-back from group members and a rich discussion followed.

The methodology used was participatory, inclusive and interactive.  The training was evaluated by participants and an internal NCP expert at the end of the three days.  By all accounts the participants greatly appreciated the session, overall approach, and insights. The event ended with the awarding of certificates of participation to all the participants. N’Zarama Centre for Peacebuilding (NCP), intends to conduct similar trainings as requested by the Kings and Traditional Chiefs in all the 31 regions, two autonomous districts and two Kingdoms. With Cote d’Ivoire facing a crucial election year, the imperative to strengthen the conflict resolution and peacebuilding capacities of all the Kings and Traditional Chiefs in all the regions, autonomous districts, and Kingdoms cannot be over emphasized.

Make sure you enter all the required information, indicated by an asterisk (*). HTML code is not allowed.