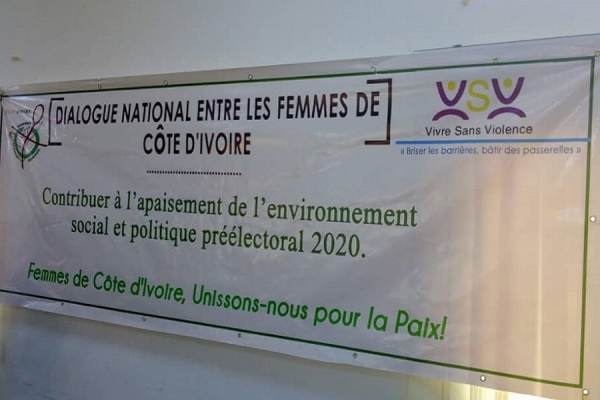 On January 29, 2020, the NGO ‘Vivre Sans Violence’ organized a conference in partnership with the ‘REFSFECO’, around the theme: ‘Dialogue Among Women to Build Peace in Cote d’Ivoire ahead of the 2020 Elections’, at the conference hall of the ECOWAS office in Cote d’Ivoire.

The aim of the conference was to contribute to the appeasement of the 2020 pre-electoral social and political environment by mobilizing and structuring women, but also sensitizing them on their role in conflict prevention and peacebuilding in Cote d’Ivoire ahead of the 2020 elections.

The conference was organized into two distinct parts: a). exchanges/discussions, and b). suggested solutions and actions/recommendations.

The second part of the agenda focused on suggested solutions and actions/recommendations. Participants suggested a number of solutions, as well as actions. These include:

Many participants agreed that due to time constraints, it would have been best to organize a workshop which focuses solely on the analysis of the political situation in order to record concrete points to be disseminated, and a second workshop dedicated specifically to the solutions/actions/recommendations. There was also a feeling of ‘déjà vu’ with regards to these sorts of workshops. Many felt that there had been a lot of meetings among women organized to build peace in the country, but that no concrete action had followed afterwards.

The event was particularly insightful and informative. It provided us with a better understanding of the political history of Cote d’Ivoire, but also gave some ideas to be pursued as we seek to mobilize women in leadership positions so that they may become the drivers of peace in Cote d’Ivoire along with young people. Additionally, we are of the belief that there should be a way of disseminating the outcomes of these initiatives to a larger audience, so that many people may become acquainted with them. If political decision-makers (including the president) could take part in such sorts of workshops, it would even be better. This is because dialogue is the means to understanding how people feel, and one thing Ivorians feel, just like the women at the conference, is that they are not being given the opportunity to express their feelings, which in turn constrains the country from achieving true reconciliation.

There were approximately 100 participants from different organizations who took part in the event, including: political parties, faith-based organizations, as well as civil society organizations. Other participants included female public figures, and observers.

Make sure you enter all the required information, indicated by an asterisk (*). HTML code is not allowed.